First off let me TIP my hat to Lebron James for that GREAT game winning shot with 1sec left on the clock to even this series with Orlando at 1-1. MVP=what u SUPPOSE TO DO! Yet my great appreciation for the skills this man possess! Take this article the way you want, but KNOW that I respect LBJ as a player and acknowledge how great he is at the tender age of 24, he only has UP to go. So understand I am NOT bashing him personally, rather the LACK OF RESPECT for a man who has PROVEN HIMSELF TIME AND TIME AGAIN 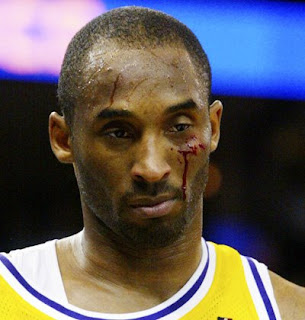 AKA MR. BATTLETESTED!I sat and watch the Orlando Magic come into Cleveland where this team (Cavs) have only one LEGIT loss (to the man posted above) while the other was to Philly at the end of the season in a game in which LJ did not play, and beat THE KING on an amazing shot by Rashard Lewis, where Dwight Howard totally dominated the paint with a 30/13 game. They kept the camera on Lebron while he “limped” off the courtlebronwimpand kept the players from the WINNING team waiting, while they looked at Lebron’s booboo. You would have thought the man broke his leg or something. I didn’t see them keep Carmelo waiting while Kobe was visibly frustrated and “hurt” about the Lakers lost…I’m just perplexed. But the media is what really cause me to vent in this manner. Let’s start with Stephen A Smith, this guy says ” 1 more thing: Lebron was covered on that last shot, but he found a way to TAKE that last shot. Kobe should have done the same. NOT FISHER.” Then there is the TNT crew, who are the biggest LOLLIPOP lickers of all. But out of all of them Kenny “the jet” Smith takes the cake. When Kobe Bryant went on his AMAZING PERFORMANCE in game 1, he comments were more to the nature of Kobe Bryant made some gr8 plays, but it was more of the Nuggets br8ing down on defense…basically taking away THE AMAZING. I was still floating from that victory the next day when I saw those guys, & then I just wanted to go off!

Who ever made up these rules that Kobe Bryant’s legacy is tarnished if he does not win a ring without Shaq? Will the same be said about D-Wade? This is just absolutely RIDICULOUS! I never seen a player so hated on as Kobe Bryant, it’s as if he has PERSONALLY done something to each of these people. His legacy most assuredly DOES NOT hinge on winning a championship without Shaq, it’s hinges on (in my humble opinion) his ability to CONTINUE to trust his teammates with that legacy. Actually right now, I know his confidence is feeling a little shaky, but he is trying. It is an absolute necessity that Pau, Drew, Bynum, Odom, & especially Fisher must KOBE-Diem, because they have the motivation of winning their first, but the ability to help ARGUABLY THE BEST PLAYER IN THE GAME…solidify his greatness! To me he has already solidified his greatness just by being WILLING to sacrafice in anyway necessary to win. To us it seems like the logical thing to do, but it was huge for Kobe…so I tip my hat to him!

He even has WNBA players hating on him. Like I said before, it’s as if he PERSONALLY did something to each of them to make them hurt him. SMH! When ESPN debut “Kobe Doin’ Work” players were on twitter saying: Spike should have made Lebron doin work, cause Kobe does not do it for me”…Monique Curry, Tasha Humphrey, etc…absolutely ridiculous!

I sit in my room remembering 62pts through the 3rd qtr, outscoring an entire team, even better 81pts, & then 3 50pt games in a row, simply because HE HAD TOO! A man who’s only desire is to be the BEST IN HIS PROFESSION! He has not robbed anyone of anything, he simply strives daily to win championships, and HE IS TOTALLY DISRESPECTED BY THE MEDIA! Even Jerry West is weighing in right now…and I digress on that, I mean West is the Logo. And West is the great MOTIVATOR, SO WHEN IT’S NBA FINALS TIME…we get to see if this 1sec shot will be there for the KING or will the BLACK MAMBA strike for CHAMPIONSHIP #4!

SIDENOTE: When the Olympic Gold Medal was on the line, and Lebron twice WOULD NOT PASS THE BALL TO KOBE in the waning moments, a timeout was taken. Cannot say what was spoken in the huddle, but the next two plays Kobe took the ball and scored…USA wins the Gold Medal, on a team LAUDED with STARS, the brightest STAR shined!

I LOVE THE LAKERS
Posted by Random Entertainment at 2:26 AM