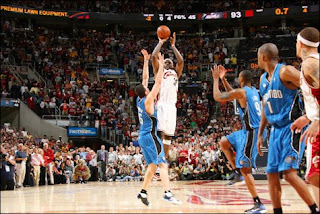 It was the shot heard around the world-my call: 1sec left on the clock, Hedo on Lebron, Lebron gets away catches the pass: IT’S GOOD, IT’S GOOD! LEBRON JAMES JUST HIT THE GAME WINNING SHOT TO TIE THE BEST OF 7 SERIES VS ORLANDO AT 1-1. End scene! But NO, there was play by play talk, a break down of the play frame by frame with the TNT crew! It was no wonder Lebron could hardly walk after the first game, he has so MANY PEOPLE hanging on his NU–! Even with Charles Barkley “attempting” to be FOR the Magic, he was hanging on too. I wonder do they think Lebron will give them some type of renewed life for the game? SMH

Tonight Kobe Bryant walked into the Pepsi Center, undoubtedly with only ONE thing on his mind, win game 3! He could hear the GREAT DEBATE going on, KOBE or LEBRON, the words of his MENTOR (THE LOGO) violently thundering in his ear, & yet on the outside he remains CALM, but his MENTALITY ROSE ANOTHER LEVEL! People will NEVER understand the CLOSER MENTALITY a person needs to become LEGENDARY IN THIS GAME! I had a person say to me today: “the reason people show Kobe no love is because he declared himself great!” I’m sorry people, I never heard Kobe “declare” himself anything except being the BLACK MAMBA! We all know if this man played basketball in any other city, he would be RESPECTED BY ALL! I “hated” Michael Jordan, even moreso after what he did to us in 91, but only as a PLAYER (no rephrase) only as a GREAT PLAYER, understanding he had the ability to close MY team out of a win!LOL Yet media analysts have written off the Lakers as a TEAM and Kobe Bryant as THE GREATEST PLAYER in the league! How can I say that you ask? Because on this 23rd day of May, 2009 Kobe Bean Bryant hit a 3ptr with 1:10 left in the 4th quarter that put the Lakers up for good, and there was no shall I say HOOPLA, KOBE BRYANT NUT HANGERS (& why not), maybe it’s because for 12/13yrs HE HAS BEEN DOING THIS!!!! Have the media become so bored with the heroics of Bryant that they no longer even consider them CLOSER MOMENTS anymore? Absolutely Crazy! Then in the middle of the LAKERS battle royal with the Nuggets, they INTERVIEW LEBRON on his game winning shot…sounds like what happens to people who’s not use to doing BIG things when they COUNT?! I’M JUST SAYING…LOL. And people this is NOT in anyway a BASH Lebron James post, I’ve said it before, but if the media do not want to acknowledge #24, even when the BIGGEST COUNTRY (people wise) says he is, ok I’m baffled! I can understand the youngsters gravitating towards Lebron right now, but most of the media that’s around now, knows in their basketball HEARTS who is the best player in the game-KOBE BEAN BRYANT! Update: Stephen A Smith says Kobe hit 15 of 17 FT’s. Big three as the game waned. That’s what makes choosing b/t him and LeBron so hard. Kobe’s still the ultimate closer…so that’s the first nu– hugger, though he barely hanging on, w/ ability to fall off at anytime.lol

SO LAKERNATION it’s up to us to REMIND THE WORLD, that we are not going to chop Kobe’s accomplishments, skills, and passion into parts-saying he is the best closer, but would rather have Lebron as a teammate…smh, isn’t that crazy? Why have a great “TEAMMATE” who YOU WOULD NOT CHOOSE AS A CLOSER? Im just asking.Oh & Kobe is definitely a good teammate! 4get b4, the GREAT DEBATE is going on NOW!

SIDENOTE: You want to know why the Lakers will win this series 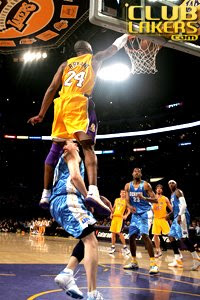 because this man WILL NOT QUIT! HE WILL NOT ALLOW HIS LAKERS TO QUIT and that’s advantage Lakers! He would not allow the Nuggets to take true control to a point where the Lakers had no chance in this game.He did no let the refs, the fans, or even his younger teammates (Jordan Farmar receiving a tech) to mute his GREATNESS. Lead never ballooned past 8pts, and Kobe Bryant continued to be spectacular! Here’s the call: Kobe Bryant comes down 1dribble, 2dribble pull up (SILENCE)HITS THE 3! KOBE BRYANT JUST HIT A BIG 3! HE PUTS THE LAKERS UP BY ONE! 2008-09 NBA CHAMPIONS THE LOS ANGELES LAKERS! LAKER WORLD ORDER STAND UP! LET’S GO GET IT!
Posted by Random Entertainment at 2:33 AM