THE 2 BEST WNBA TEAMS OR AT THE BOTTOM RIGHT NOW! 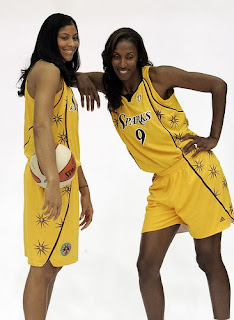 The Los Angeles Sparks and the Detroit Shock are at the bottom of their perspective divisions right now, and their are A LOT OF EXCUSES AS TO WHY, but can excuses really be used?
Let's start with my BELOVED Sparks, who are 2-5 right now! The two wins coming at home. When this season started, once again the Sparks were predicted virtually by every GM to win the WNBA title, but turbulence has struck the favorites due to injury by Lisa Leslie, and the pregnancy of Candace Parker. Candace Parker delivered a beautiful baby girl on May 13, 2009 with husband Shelden Williams, but the Sparks picked up LA native Tina Thompson, who was a free agent due to the collapse of the Houston Comets,who also avg 18ppg in Houston. Then their was the acquisition of all-star shooting guard Betty Lennox, who in my opinion has the mentality of Kobe Bryant on the court when she is allowed to roam free. So now tell me why is this team 2-5?
Well the Sparks started off their season with a very impressive win over the Detroit Shock at the Staples Center!Everything seemed to be clicking well for the team, until Detroit made 1 adjustment...ZONE! The first half of that game the Sparks scored 52 points, and in the second half they only scored 26pts. But that was only the beginning, in the game against Phoenix, the Sparks were in control and Lisa Leslie went down...and here we are! This has not been a great home-coming so far for Tina, but because she understands adversity, she is their helping the younger players to know it's a long season.
The Detroit Shock on the other hand have been challenged in several different ways, from injury, to losing the most winningest ACTIVE coaches in the WNBA, Bill Laimbeer. I don't have a lot to say about the Shock, but I do want the fans to tell me, which team will be above .500 first, and what it's going to take for them to get their.
Posted by Random Entertainment at 12:53 AM