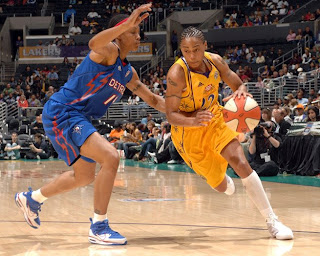 The Los Angeles Sparks opened their WNBA season versus the defending champs-Detroit Shock. No one ever knows what to expect when these two teams hit the floor(no pun intended) after the fracas from last year starring Candace Parker and Plenette Pierson. Yet today showed two entirely different teams, the Sparks showing off their star-studded lineup with 4 time WNBA champion Tina Thompson(of the now defunct Houston Comets) and 2004 Finals MVP Betty Lennox, who was waived by the Atlanta dream after last season...still shaking my head on that move. Today as the Sparks took the floor, I just wanted to see if I could "identify" this team on the floor. Starters: PG Kristi Harrower SG Betty Lennox SF Tina Thompson PF Delisha Milton Jones C Lisa Leslie, each person on the floor know what it's like to be a MAJOR contributor for their previous teams, so how would they be willing to sacrifice their games? Well they started with going into the CAPTAIN (Lisa Leslie)from the beginning, but she was off, so as she passed out of double teams, Tina Thompson and Betty Lennox took the cue and went bananas! Tina finished with 18pts/6brds, and Lennox had a double double with 17pts/10brds...one of the best rebounding guards in the league, the other being Alexis Hornbuckle for the Shock. 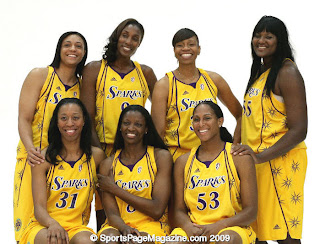 Deuce Deuce is truly going to be the key to this Sparks team. They are DEEP one through 11, and if Betty Lennox can keep her "cool" she will have her second WNBA Championship. Lisa Leslie shot a dismal 3-11 today and the Sparks were still up by 20, on the play of Tina Thompson and Betty Lennox, also the bench came in and did their job as well. Shannon Bobbitt is on the bench right now, playing behind Noelle Quinn and Kristi Harrower, but she just needs to be patient, because when they need to speed the team up, their is NO BETTER guard.
The Sparks will have to work their offense against a zone defense, because once Detroit began to play zone, the Sparks offense stalled greatly. Yet I believe Michael Cooper will make the correct adjustments. Oh yea I must mention the play of Vanessa Hayden. She was magnificent, 12pts/3rbs in 20minutes of play (going 6-6). So her scoring help to make up for Lisa's average.
Well the Sparks get to do this again on Monday when they are in Detroit, watching the ring ceremony, hopefully that will get them fired up. Plenette Pierson got tangled up with Tina Thompson today and ended up falling on that bad shoulder, and was out for the rest of the game...Kara Braxton is suspended for 6gms for D.U.I., and Cheryl Ford was still out from tearing her ACL, so they are short-handed right now, but nonetheless a great win for the Sparks in their quest for the Championship.
Posted by Random Entertainment at 2:36 AM