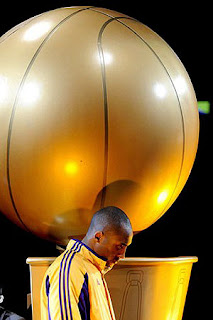 So after watching Game 3 last night, I wanted to begin to write my thoughts, but I had SO MUCH going on, but the one thing that continued to stick out was: WHY IS LARRY OBRIEN TROPHY PLAYING HIDE-AND-SEEK WITH KOBE BRYANT, AND THE LAKERS? LakersNation, let’s take it back to 2003-2004, the Lakers go out and get Karl Malone and Gary Payton arguably two future hall of famers, and the Lakers are on a roll, and back in the finals against the up and coming Detroit Pistons, and what happens….KARL MALONE SUFFERS HIS FIRST MAJOR KNEE INJURY, and he goes out, and the Pistons go nuts, and our Lakers lose the series 4-1. The team implodes, and our Lakers go in a downward spiral. But not to VISIT that history too much, let’s fast-forward to 2007-2008 and things turn around in a big way…we were praying for Kevin Garnett (willing to give up Bynum & Gasol), but we get something BETTER, yea I said better, we got Pau Gasol, for NOTHING…and we get the Fish back and the Lakers were marching back to the finals, with EASE! Yet in the finals versus Boston we were SERIOUSLY outplayed, and suffered a crushing defeat. Possibly that would have been Kobe’s 5th ring, and the Lakers 16th, and now the Lakers are back again, with a CHIP on their players, and in a big close out game that can give the Lakers a COMMANDING 3 games to 0 lead, our SUPERSTAR, THE BEST ON THE PLANET, (DON’T GET IT TWISTED) missed 5 free throws, and a crucial turnover! I’m not even going to say anything else bad about Kobe or the Lakers as a whole, because it was a miracle that the Lakers actually had many opportunities to win this game…Kobe will NEVER DO THAT AGAIN, in a game of this magnitude.

Much has been said about Kobe “hitting a wall” but his response to that is: “so what if I did, I’ll just run right through it!” That tells me that no matter how “elusive” this 4th championship is attempting to be, in 2009 Kobe Bryant and the Los Angeles Lakers have found it “ducking in the corner”, yet giving off a GOLDEN GLOW, not being able to truly hide itself…always smiling, but being a big “tease”! I don’t think the Lakers will allow this Trophy to get away this time, it’s like meeting up with the love of your life one more time, and you are refusing to go home without him/her! ATTAINING THE CHAMPIONSHIP IS ABOUT TIMING, AND LAKERNATION IT’S THE LAKERS TIME! It was also TIME for the Orlando Magic to get their first ever NBA Finals win, so congratulations magic fans, what you were suppose to receive you got it, now MOVE OVER, cause the LakerShow is coming for the gold.

Sidenote: The Orlando Magic is now 7-0 at home when 7yr old Gina Marie Incandela sings the national anthem, that includes last night game, so now it’s going to be a shame that this beautiful little girl will have to take her first “L” of her career…lol. Hey they put her in this…lol. LAKER WORLD ORDER STAND UP!

For more great laker news, and podcasts, check out www.thelakernation.com.
Posted by Random Entertainment at 12:37 AM