The Wait is OVER! WNBA MVP CP3 will play Sunday! 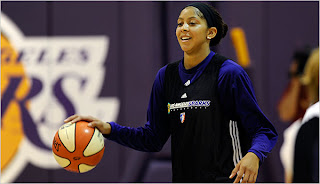 LOS ANGELES - Sparks forward Candace Parker, the reigning WNBA MVP, will return to the court on Sunday, July 5th at STAPLES Center as the Sparks take on the Phoenix Mercury at 6:30pm, it was announced today.

Parker has missed the season until this point after giving birth to her first child, Lailaa Nicole Williams, on May 13th. She was cleared by doctors to begin practicing on Tuesday, June 30th, and Parker has continually said that she will play when she feels ready.

"I feel like I'm really beginning to get my rhythm back," said Parker. "This was a great week of practice, and it felt good to be with my teammates on the court. I'm not expecting to play 30 minutes but I definitely can't wait to get back out on the floor."

In 2008, Parker became the first WNBA player to win both the WNBA MVP and Rookie of the Year in the same season and just the third player between the WNBA and NBA to receive both honors in the same year. She started all 33 games she played in, led the league in rebounding and led all rookies in scoring and rebounding.

"We're extremely happy to have her back," said Head Coach Michael Cooper. "After watching her practice this week, it looks like she can play some minutes. It's a huge addition for us and a big game for her to come back. She made her rookie debut against Phoenix and now she will come back against them. Obviously she isn't 100% and we will take things slowly but clearly Candace, even at less than 100%, is an incredible player."

In honor of #3's return, the first 50 fans to purchase tickets online will have the opportunity to buy $10 seats for just $3. CLICK HERE to purchase the seats online now or for more information on how you can be there as Candace returns to the floor call 1-877-44-SPARKS.
Posted by Random Entertainment at 5:32 PM