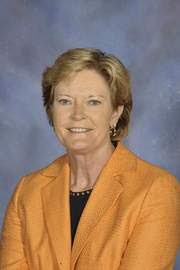 Pat Summitt had her eye on Candace Parker from the time the phenom was a preteen playing AAU basketball.

When the legendary University of Tennessee women's basketball coach met her future superstar at a DePaul game, Parker was just an eighth-grader in Naperville but already making a name for herself nationwide.

"I just thought a lot of what Candace brought to the game was she just had a great skill set and passion and a drive and a love for the game," Summitt says now.

"So many players that are skilled and play the game, to me, they're not always in love with the game, and I thought Candace represented that type of player that was really special and unique in a lot of ways."

Parker still had an entire high school career ahead of her, but she remained on Summitt's radar and the coach made sure she stayed on Parker's as well.

"My take on it was, 'I don't want to play against her,' " Summitt said during a telephone interview last week. "We better find a way to sign her."

That's just what she did. In November 2003, Parker announced on national television she would play for Summitt at Tennessee.

After recovering from a knee injury, Parker went on to help the Lady Vols to back-to-back national titles and took home countless awards of her own before signing with the WNBA's Los Angeles Sparks.

Summitt has quite a few fond memories of Parker's time at Tennessee, but one that stands out came in the 2008 NCAA semifinal game against Louisiana State University. Tennessee was down by one with seven seconds on the clock. Huddled in a timeout, coaches agreed to set up a play that would put the ball in Parker's hands.

"I thought she had time to get down the floor and make a play for herself, but her instincts took over and she saw an opening and threw Nicky (Anosike) a beautiful pass and when it didn't go in on the first one I was like, 'oh no,'" Summitt said. "Thank goodness Alexis (Hornbuckle) was athletic enough to tip it in."

Tennessee beat LSU 47-46 and went on to win its second straight national championship.

Summitt said having Parker, Anosike and Hornbuckle on the team together was a special time both for her and the team's legion of loyal fans.

"In the end, I think the players understood what it means to play in that environment," Summitt said. "I think those last two years they were just passionate about winning and they kept each other in check in a way it wasn't difficult to coach them. It was fun to watch them play."
Posted by Random Entertainment at 8:54 PM