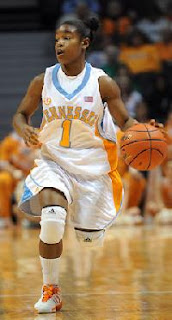 Hello LadyVol fans. I wanted to take the opportunity to help all the fans, even myself, get to know the players a little bit better. I'm currently trying to reach out to each player, whether by myspace, facebook, or any other social media, just to get some type of "inside" scoop on their personalities and why they love basketball so much. Better yet why they wanted to play for the best college team on earth. (hey i'm biased)lol.
Well I would like to start by saying I could not find Brianna ANYWHERE. So this introduction will simply be based off of what I have researched and what is written on the utladyvol.com site. I can say that Brianna reminds us of Shannon Bobbitt in more than just height, but her fiery attitude on the court also reminds us of the former 2 time champion. Brianna has great speed and quickness with the basketball, but last year showed a lack of consistent focus it took to run Pat Summit's offense.
Her highest scoring game was against Duke, where she scored 14pts/2rbs/2ast. Her career avg as a freshman was 4pts/2rbs/2ast a game.
I believe that Pat was hoping that Brianna would come in and take over where Shannon left off, but leading this talented group of women on the floor seem to be a little bit overwhelming for the "tiny" guard, which lead to Stricklen being made the lead guard. But it's one thing I noticed, that anytime Pat would have Brianna and Shekinna in the game together, Shekinna was a lot more affective offensively.
I am anxiously awaiting to see where Brianna will fit in as this team becomes filled with even more talent. Incoming freshman Taber Spani, who played point for the USA under 19 squad this summer (won gold),will definitely be competing for the starting point guard position. So I am rooting for Brianna to be ready to lead this team. I know that Brianna had a "small" problem with the assistant coaches last season, causing her to be benched for a game. Yet don't let that make u think any less of Bass, because she definitely has what it takes to play on this level.
So now Brianna show the LadyVolNation what you got.
UPDATE: AUG. 20, 2009 (VIA UTLADYVOLS.COM Sophomore Briana Bass, who Coach Summitt indicated would be the starting point guard if the season began today, added "I thought as a team, we came out and made great strides today. We really showed off the hard work we put in over the summer in the gym and in our strength and conditioning. We each continue to improve our game and hopefully that will take us to our goal of winning a national championship." This is what I wanted to hear...way to step your game up Brianna, let's do this!
Posted by Random Entertainment at 2:51 AM