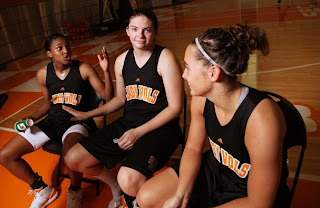 Tennessee moved a step closer to the official start of women's basketball practice next month by convening their first full-team workout on Thursday.
Since fall semester began, the Lady Vols had been conducting individual workouts that involved no more than four players at a time.
"We worked on all these things in individuals,'' freshman Taber Spani said, "but now it's understanding it in a team setting."
Actually the Lady Vols spent most of the individual sessions introducing and drilling on defensive concepts. They will use the team workouts to start playing catch-up on offense.
Team workouts also introduce the use of male practice players.
"The size of the guys down low defensively surprised me,'' freshman Faith Dupree said. "I've played some big people, but those are the biggest I've played."
UT coach Pat Summitt likely will be more vocal as well. During individuals, she spent more time observing while her assistant coaches directed the drills.
Dupree was happy to report that she survived a Summitt scolding on Thursday.
"You know what? Bring it,'' Dupree said. "I'm going to mess up, and she is going to tell me what I did wrong."
Read More
Posted by Random Entertainment at 6:57 PM