LadyVolNation stand up! Introducing to you "The Anchor" Kelly Cain, 6'6 of block party! Wow where do I start...how about with a look of disgust at the end of the game versus ballstate! Now I don't want to bring up "bad experiences" (believe me) but there was a look on Kelly's face that said it all. She only played 14 minutes in that game, I'm guessing it was her knee, because I don't remember her having any fouls. Now bear with me, cause I know we don't want to keep reliving that game...but as the teams lined up to shake hands, one active player was on the bench: Kelly Cain now check out the look on her face. 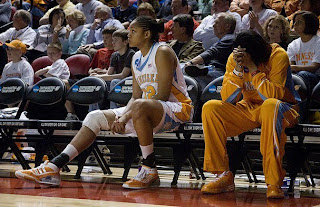 Now people can interpret things all type of ways, but if I could put a bubble over her head (it would say: What just happened? Then switch to-This will NEVER happen again on my watch)! First off let's make sure that everyone knows that Kelly nor Vicki were acting like "poor" sports or anything because they were sitting on the bench...it's just when you are playing for the #1 women basketball school in the history of the NCAA, coming off of back to back championships...we don't make history like this!

I said that to say this...I watched Kelly score baskets with the greatest of ease when she is on the block. She knows how to use frame to carve out space under the basket, rendering her opponent helpless. With her height all the guards have to do is throw it at the rim, she has very soft hands around the basket. I got a feeling it's going to be "hack a Cain" this season, cause she will be pinning opponents under the basket and powering up...uhhh who is going to stop her? Oh so Kelly if you reading this free throw practice this offseason cause you will live at the line. Cause they will either foul or get scored on.

One other thing I would like to point out is, I hope she plays "The Anchor" aggressively this season. I truly want guards to be scared to death to come into the paint with Kelly standing right there. Whoever tries it, will have their shot mailed back to their home state. There is nothing worse than seeing your "family" struggling, fighting, and not be able to do anything about it. But guess what Kelly had the screws that were in her knee taken out...and when she steps back onto the court, she will be ready to play her first full season for the LadyVols, and we can have her for 2 more years to wreak havoc on the SEC and the NCAA wearing the Orange baby! Being THE ANCHOR!
Side note: We are praying earnestly that Kelly does not get another concussion. By my count she has suffered at least 3 since being at UT. These have occured at different times during her UT career! Family that PRAYS together STAYS together! LadyVolNation stand up!
Posted by Random Entertainment at 4:00 AM