So Jordan Farmar Wants To Be A Starter? 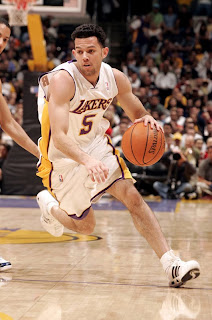 Laker fans this just in- Jordan Farmar wants to be a starter, whether as a Laker or for another team. Well then Jordan it seems fairly simple to me, "take Fisher's spot". It's no secret that Derek Fisher (who is 35yrs old) has no problem taking a back seat to Jordan or Shannon, as long as the team continues to win. He was more than ready last season for Jordan to take the reigns, but unfortunately Jordan was injured, forcing Fisher to play extended minutes. As Laker fans we all know the potential that Farmar has, but the problem has been consistency. He has averaged around 18minutes a game since he has been in the league, and though the intelligence for the game is there, consistency on defense as well as offense has not added up the way the Lakers or Phil Jackson would like in order to play him extended minutes in lieu of the aging Fisher.


I've talked to Mitch a bunch of times and he says he's got a ton of offers and didn't consider trading me. It's just you have to entertain all the offers you get. Since I haven't got traded, it means they want me here."

"Derek's had a great run. He's probably going to be the guy starting off. I just want to continue to push him."

But what I need for Jordan to understand, and take very seriously is who is pushing him: SHANNON BROWN! Matter of fact that may be the other way around. Jordan must understand that "tenure" does not automatically mean that you are next in line. Shannon Brown came onto this team just being "greatful" to be here. His whole perspective of being on this Laker team is whatever they want me to do, I'll do it. His big smile, and eagerness to please has already stapled him in my heart as one of our best role players. Attitude takes you a long way, and we all have watched Jordan sulk and pout when his playing time was not what he desired it to be, but you have to be deserving of the time Phil Jackson gives. All I'm saying is Jordan while you have already pegged yourself as the obvious choice for the next point guard of this star-studded roster, don't look over your shoulder, rather look to the right of you-standing there is 6'4 211lbs of defense/offensive muscle athletic and most of all "happy to be here". His name is Shannon Brown. 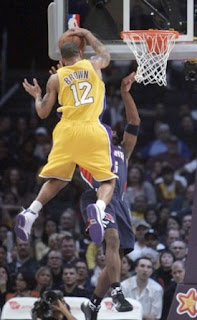 Posted by Random Entertainment at 1:58 AM