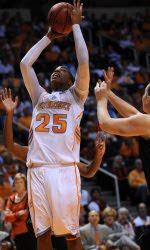 SAN ANTONIO -- Returning to San Antonio likely won't be this easy for Tennessee.
Taber Spani scored 18 points and Glory Johnson added 17 as the Lady Vols (No. 5 ESPN/USA Today, No. 6 AP) crushed Texas Tech 91-53 on Tuesday night in what Tennessee hopes will be the first of two trips to the Final Four city this season.
The road back is bound to be tougher: Tennessee opened the second half on a 32-4 run, held Texas Tech to 30 percent shooting and handed the game over to Spani and the rest of the Lady Vols bench early.
About the only thing giving the game a Final Four feel was defending national champion Connecticut watching nearby, waiting to play Texas (No. 13 ESPN/USA Today, No. 10 AP) in the second game of a doubleheader.
"It gives [the players] a taste of what it's all about," Tennessee coach Pat Summitt said about playing in the San Antonio showcase. "Clearly, we all want to be back. It kind of whets your whistle a little bit."
Shekinna Stricklen scored 16 points for the Tennessee and Angie Bjorklund sank four 3-pointers to finish with 14. The mostly burnt-orange crowd here for the Longhorns took in a dominating preview of Tennessee, which will face Texas at home Dec. 6.
Kierra Mallard scored 15 points and was the only player in double figures for Texas Tech. The Lady Raiders have never beaten the Lady Vols in six tries.
Tennessee flirted with holding Texas Tech to a single-game school record for poor field percentage before the Lady Raiders scored 21 of their points in the final 10 minutes. Before then, Texas Tech was shooting just under 24 percent from the floor.
Like the three other teams in the AT&T Center for the doubleheader, Texas Tech was once a Final Four contender before longtime coach Marsha Sharp retired after the 2005-06 season. Coach Kristy Curry has been trying to get Texas Tech back on track since.
"This does not define our season," Curry said. "When you're called for this opportunity, do you turn it down? No. You know this is the right step to take to get Tech back to where we want to be."
The Lady Vols have now opened the year with two wins over Big 12 teams after beating Baylor (No. 9 ESPN/USA Today, No. 8 AP) on Sunday. They'll play another pair of ranked teams starting Sunday at Virginia (No. 17 ESPN/USA Today, No. 12 AP) and then Nov. 25 at Middle Tennessee (No. 24 AP).
Stricklen just wants to be back in Texas come April.
"As a team that's our main goal -- to come back here," Stricklen said. "Being here for the first time we really enjoyed it and we want to be back. We know what it takes to come back."

UTLADYVOLS
Posted by Random Entertainment at 12:51 AM