USA U16 Trials-May 09: Part of being a point guard is being a leader and a big part of leadership is having a positive attitude. Andraya Carter of Buford, Ga., has the mental part down. She gets on the floor for any and all loose balls. She gets knocked around a bit, which leads to her being on the deck more than she'd probably like, but she hops up with a smile each and every time. She is a fluid athlete and changes directions well, but against aggressive defenders she gets in trouble going east-to-west. As she gets older and stronger this will probably change. She shot the ball well in spots and this kid is one to watch over the next three years.

Nike Regional Skills Academy-April 09: Georgia's Andraya Carter has the tools to be effective at both the point and the shooting guard spots. The 5-9 Buford High School product has the versatility to score effectively herself or to set up her teammates with high percentage looks. Her lean build doesn't keep her from making plays and scrapping with anyone out there. She handles the ball well but is just as effective without it in her hands on the cut. Her jumper is just that, a true jump shot with good elevation. Beyond her fundamentally sound game and impressive athletic skills is a relentless effort and focus on every possession. SOURCE

Posted by Random Entertainment at 8:06 PM No comments:

LAKERS VS WIZARDS..NO BYNUM NO PROBLEM

Posted by Random Entertainment at 9:11 PM No comments:

Lakers vs Suns-The Lakers Get Tough..

Posted by Random Entertainment at 10:33 AM No comments:

Posted by Random Entertainment at 8:08 PM No comments:

Lakers vs Raptors 109-107 on Buzzer Beater by Kobe Bryant

Posted by Random Entertainment at 6:15 PM No comments:

ESPN.com news services
The WNBA's Tulsa Shock will hold a news conference Wednesday at 11 a.m. ET to announce the signing of former track star Marion Jones.
Jones worked out for Shock coach Nolan Richardson last Saturday.
Jones was stripped of five medals she won in the 2000 Summer Olympics after she admitted to using performance-enhancing drugs prior to the Summer Games.
She was given a six-month prison sentence after she admitted lying to federal prosecutors.
Now, at age 34 and after giving birth to her third child just eight months ago, Jones is attempting an athletic comeback -- this time in basketball.
Jones has not played basketball since leaving North Carolina in 1997, choosing instead to concentrate on her track career. But as a freshman point guard with the Tar Heels, she helped UNC win a national title in 1994.
Jones was drafted by the Phoenix Mercury in 2003.
Posted by Random Entertainment at 11:52 PM 1 comment:

Here’s a look at the special make-up adidas TS Ace Commander shoes for Candace Parker of the Los Angeles Sparks. The style comes in White/Purple/Yellow “home” colors for the Sparks and features an EVA midsole with adiPRENE+ cushioning at the forefoot along with ClimaCool technology underfoot. Embroidered into the collar of the lateral sides of the shoes is “ACE3″. Continue reading for more detailed images of the Candace Parker adidas TS Ace Commander.

Images via Kenlu
check out Candace Parker new shoe. I'm so glad that these have finally come out...I saw the ladyvols wearing the light blue ones during the SEC tournament. Support the women line.
Posted by Random Entertainment at 8:34 PM No comments:

Kobe Bryant and Matt Barnes Get Into It

Kobe isn't even flinching.
Posted by Random Entertainment at 5:28 PM No comments:

Posted by Random Entertainment at 5:21 PM No comments: 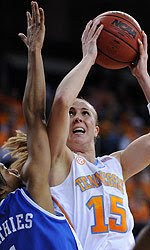 DULUTH, Ga. -- Shekinna Stricklen scored 20 points and No. 4 Tennessee beat Kentucky (No. 18 ESPN/USA Today, No. 19 AP) 70-62 on Sunday to win the SEC tournament and possibly wrap up a No. 1 seed in the NCAA tournament.
Coach Pat Summitt was so pleased she brought down the house with a postgame song.
Tennessee completed its first sweep of the Southeastern Conference's regular-season and tournament championships in 10 years. In each case, the decisive win came against Kentucky, which improved from a .500 finish a year ago to play in its first tournament final in 28 years.
Tennessee (30-2) earned its 14th straight win to give Summitt her 19th 30-win season.
Kentucky (25-7) played tough in its first championship game appearance since winning its only title in 1982. The Wildcats, led by Victoria Dunlap's 21 points, played even with the Lady Vols until midway through the second half.
Tennessee players celebrated at midcourt before starting to cut down the nets. Summitt then stole the microphone -- and the show -- when she started singing "Rocky Top."
"You are the best fans! We love you!" Summitt said after her song.
Tennessee fans dominated the Gwinnett Arena crowd of 5,854. The orange-clad fans were especially loud when the Lady Vols took control with an 11-3 run for a 61-53 lead following a 50-50 tie.
Tennessee set a school record with 15 blocks when it clinched the SEC regular-season title with its 81-65 win over Kentucky on Feb. 25. The Wildcats showed no sign of intimidation in the rematch, even after Tennessee took an early 19-9 lead.
Kentucky answered to take its first lead with 5 minutes remaining in the half.
A layup by A'dia Mathies cut the Tennessee lead to 23-22. Amber Smith then stole the ball, drove toward the basket and made a behind-the-back pass to Dunlap, who was fouled as she scored. Dunlap's free throw gave Kentucky a 25-23 lead.
Freshman Kamiko Williams, who didn't score in Tennessee's first two tournament games, answered Dunlap's three-point play with four straight baskets, helping the Lady Vols lead 35-29 at halftime.
Tennessee center Kelley Cain picked up two quick fouls and played only three minutes in the first half. The Lady Vols' depth showed as they held a 31-14 advantage in rebounds even playing most of the half without the 6-foot-6 Cain.
Cain had 11 points, all in the second half.
Kentucky opened the second half with an 13-3 run for a 42-38 lead. Stricklen's three-point play and 3-point shot helped Tennessee pull even at 46-46.
Following the last tie at 50-all, Tennessee took the lead for good with an 11-3 run, which included another 3-pointer from Stricklen.
Tennessee's Alyssia Brewer, who had eight points, was named tournament MVP.

Great job by my LadyVols! The road 2 redemption continues...Pat Summitt once again is genius for adding Alicia Manning to this starting line up, and I give much props to Alicia for understanding her role on this team, and doing it beyond anything, we could have imagined. And for her relentlessness on the offensive boards..she get's the fans MVP. And understand I noticed the games Alyssia Brewer has been having, but Manning just doing it through hustle plays, and on both ends of the floor.

Game ball goes to the freshman Kamiko Williams...when she entered the game, the momentum was turned around back into the Lady Vols favor. Kamiko played solid on both ends of the floor, and proved that when she is focused, Shekinna Stricklen is free to be that go to player we need. Her game just becomes so much easier.

Now it will be interesting to see, if the committee will give us our WELL-EARNED #1 seed in the NCAA tournament?...San Antonio the road to redemption leads to you. Go LadyVols!!
Posted by Random Entertainment at 9:46 PM No comments:

TICHA PENICHEIRO SPEAKS VIA SKYPE ON JOINING THE LA SPARKS

Honestly, I'm so happy to have Ticha join this team. She is a great assist leader, and she has the ability to get the ball to the right person in the right place. Wow this is a big pick up for the Sparks, and she provides great leadership.
Posted by Random Entertainment at 9:32 PM No comments:


I have no words for this. We know this is not the type of attention women hoops wants, and yet the sportsworld is watching now. Britney you may have truly hurt your team, cause you are likely out for the post season. They are going to make an example out of you. They were looking for who would be the next "face" of womens basketball, and although Maya Moore is occupying the role Candace Parker left open, Britney Griner was surely the next big thing..get ready for a Mike Vick type punishment...smh.
Posted by Random Entertainment at 8:14 PM No comments:

Posted by Random Entertainment at 10:23 PM No comments: