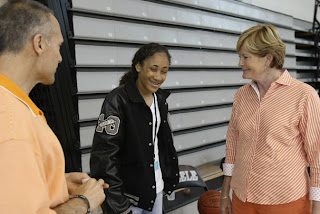 Pat Summitt new recruit for this next upcoming 2010-11 season, Meighan Simmons, seen here during her visit to Knoxville with Summitt and assistant coach Dean Lockwood. Pat has a very skilled pg right here...and the competition is going to be rugged. I look at Simmons as the opposite of Williams. Kamiko is deceptively athletic and quick...and to me has the better handle, but Meighan is just QUICK...she can't hide it...the girl can surely score, as evidenced by her 21pts performance during the McDonald's All America Game. Another thing I love is she is a very humble kid, and I don't think Pat will have a problem coaching her at all. We all know that Pat "converted" Stricklen into a pg, but hopefully she will just put her trust into one of these kids she has recruited and roll with it. Honestly, I believe that with Simmons and Williams, the problem has been solved...when u ready to run, load up the posts, and the wings...and both of these players can find the open shooter, but more importantly they can both score off the dribble.
I know it's been hard for us, LADYVOLNATION, but remember when Candace's class came in, it took them two years to get to the Ship, and one took GOD...to get there..lol (Candace's shoulder dislocating twice & a last second shot by Alexis Hornbuckle to beat LSU) yet they persevered and won it all. Get ready for the two best shows to date from LadyVols team...LET'S GO!

COLUMBUS, Ohio (AP) — No one was more surprised than Meighan Simmons that she ended up as the player of the game.

"To be honest with you, I wanted to come here and have fun," said Simmons, from Steele High School in Cibolo, Texas. "I wasn't expecting anything at all. It's just a blessing to be in a game like this."

Chiney Ogwumike, headed for Stanford, had 14 points and Duke's Richa Jackson added 12 points for the West, which built a big early lead and then hung on as the East mounted a furious comeback.

Natasha Howard, who will play at Florida State this fall, was the East MVP with 20 points, while future Connecticut teammates Bria Hartley and Stefanie Dolson had 17 and 12, respectively.

Howard, Ohio's Ms. Basketball out of Waite High School in Toledo, was supported by several dozen relatives and fans who drove down for the game.

"That was my high school team, my mom and some friends," she said. "They were the loudest people in the crowd."

With the game tied at 16, the West scored 21 of the next 27 points to take control. Jackson, a Duke signee, had six points and Ogwumike and Simmons each had four in the surge.

The East, down by as many as 22 points, drew as close as six points with less than a minute left on a 3-pointer by Penn State's Maggie Lucas. But Simmons hit two foul shots and Madison Williams, headed for Michigan State, hit a follow for some breathing room for the West.
LATIMES
Posted by Random Entertainment at 11:34 AM