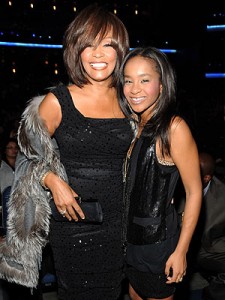 Please God, wrap your arms around Bobbi Kristina at this time. We all know how close she was with her mother.

It is also being reported that Whitney's body was found submerged underwater in the bath tub. Bobby Brown has got to step in right now for his daughter as well as the rest of the family. Prayers up for the family.
Also as a tribute to the late great Whitney, rapper Twista has dropped a track with space for someone to get on the song with him. Check it out. I would love to hear some new songstress on this, like Dondria & Tiffany Evans.

Posted by Random Entertainment at 5:00 PM