THE CASE OF TRAYVON MARTIN: AMERICA DO SOMETHING! 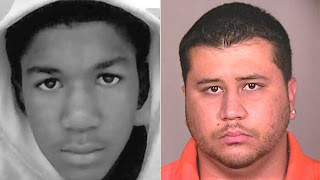 The past 3 or so weeks have been undoubtedly the worst for the Martin family. Their 17yr. old son was shot and killed by a neighborhood watchmen named George Zimmerman, in a gated community in Sanford, Florida. According to reports, Zimmerman is claiming self-defense in the matter, and because there was no one (which is crazy, being that neighbors have spoken up) to prove if he was lying, they did not have enough evidence to arrest him, so he is still free!

I could spend hours talking about if the roles had been reversed, and Trayvon was the older guy, and he killed a 17yr. old white kid, it would have been NO doubt that he would have been arrested and held, simply because he was black. But right now, there is no time for that in my eyes. This case has got to continue to be spoken about, supported by every member of America, until justice prevails.

What's extremely funny, is that in an election year, not one candidate has the guts to even speak on it, at this point, not even Obama. I am also looking to see every black influential leader in hollywood and the music industry stand up at this time. With social media being as powerful a tool as it is today, at least take to that, and speak continually on the matter. This is not about record sales, box office numbers, or what club you are hosting at, it's a cause that we can all stand together and help a family, that will undoubtedly have to deplete all of it's funds, just to have lawyers to help them in this matter.

Before Trayvon was shot, he was on the phone with a female friend, whose name has not been released, check out what she had to say according to ABC NEWS:


In the final moments of his life, Trayvon Martin was being hounded by a strange man on a cellphone who ran after him, cornered him and confronted him, according to the teenage girl whose call logs show she was on the phone with the 17-year-old boy in the moments before neighborhood watch volunteer George Zimmerman shot him dead.
Martin's death Feb. 26 has stirred national outrage and protests, partly prompting the U.S. Justice Department's Civil Rights Division and the FBI to open an investigation into the case.
ABC News was there exclusively as the 16-year-old girl told Martin family attorney Benjamin Crump about the last moments of the teenager's life.
"He said this man was watching him, so he put his hoodie on. He said he lost the man," Martin's friend said. "I asked Trayvon to run, and he said he was going to walk fast. I told him to run but he said he was not going to run."
Eventually he would run, said the girl, thinking that he'd managed to escape. But suddenly the strange man was back, cornering Martin.
"Trayvon said, 'What, are you following me for,' and the man said, 'What are you doing here.' Next thing I hear is somebody pushing, and somebody pushed Trayvon because the head set just fell. I called him again and he didn't answer the phone."
The line went dead. Besides screams heard on 911 calls that night as Martin and Zimmerman scuffled, those were the last words he said.
Trayvon's phone logs, also obtained exclusively by ABC News, show the conversation occurred five minutes before police first arrived on scene. The young woman's parents asked that her name not be used, and that only an attorney could ask her questions.

Yesterday I seen a tweet from Oprah speaking in reference to attempting to reach Zimmerman for an interview.

I would only like to see this interview, after I have first seen Trayvon's parents being interviewed by the media mogul, to help bring more attention to the story. Roland Martin is on an all out charge to help bring awareness to the story, but the point that he made that stood out so clear, was him calling out the black celebrities, on their support in this matter.

Please take a moment to sign this petition.
Posted by Random Entertainment at 8:54 AM