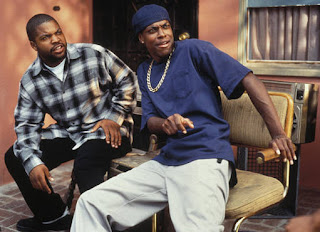 Are you ready for the LAST FRIDAY? Well finally it looks as if we are about to get it. One of Urban cinemas classics by far. The Friday installments have kept us all laughing, but we want to see Ice Cube reunite with Chris Tucker on this one. Check out what Oshea Jackson had to say about a possible reuniting with Chris Tucker on the movie.

"We was waiting on New Line to cut a check. They did that, and now, I'm writing the next 'Friday' movie. To me, it's really about not asking Chris over and over again. It's about putting the script in his hand and getting the ball rollin' for real. He's not gonna say yes until he see the script and like what he's doing in the new movie. That, to me, is the next step."

"I love Chris, I want him to do the movie. I think his fans want it. Ultimately, that's what we in the business for: to please our fans and the people who've supported us all these years -- to give them what they want, not just give them what we want to give them." (SOURCE)

Hopefully they will get F. Gary Gray to direct the movie as well. Crossing my fingers, hoping to see this one take place.

Posted by Random Entertainment at 6:20 PM