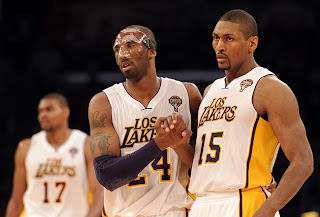 The Lakers and Heat met up yesterday at the Staples Center for there 2nd of 2 matchups for the season. This time the outcome was very different. The Lakers who have only lost 2 games at home, made sure to keep it that way. The Miami Heat, who were without Chris Bosh, because of a death in his family, came into Staples after losing by 1 to the Utah Jazz. Where most criticized James again, for not being willing to take the last shot in the game, instead opting to pass to teammate Udonis Haslem.

Okay so first let me just say this, people get over it! Lebron James does not, and may not ever develop the killer instinct of Michael Jordan or Kobe Bryant. Just allow him to be the new era Oscar Robertson of the league. We have never witnessed a specimen of his type when it comes to an ALL AROUND GAME. Now don't get this twisted for me becoming a Lebron James fan, uh uh..won't happen. LOL

Now, with that being said, shout out to Metta World Peace aka the artist formerly known as Ron Artest, who from the tip, had his sites set on making LJ work for every shot, point, assist he made. If you were paying attention, you would have seen that MWP has dropped some significant amount of weight since the beginning of the season, and his body finally looks toned, chisled, and ready to do work. It's also evident by the fact that he has had 3 dunks in the past 3 games. To me he was the difference in this game. His stat line read, 17pts/4steals (the numbers that matter most to me). Check out what Ron said during a post game interview with NBA TV, as he made the Lakers Big 3, the big 4!

I could go on to talk about the great play of Andrew Bynum as well, but at this point, people should really be getting over this trade Bynum for Howard thing. It's one thing that I can't stand, is panting over a guy who does not want to be on your team. Howard is so afraid of the continual comparisons to Shaq, that he is willing to forfeit his possibility of becoming a champion right now, by playing with the best player in the world, Kobe Bryant. So if Brooklyn is where he wants to be, then so be it. We will see him in the finals, and take his candy one more time.


Posted by Random Entertainment at 3:38 PM