[VIDEO] @DONDRIA SINGS @JANETJACKSON "I GET SO LONELY" AT CENTENNIAL PARK 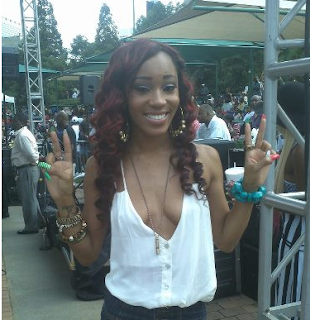 So So Def's Princess of R/B, Dondria, treated the people at Centennial Park in Atlanta Georgia, by covering Janet Jackson's "I Get So Lonely!" Whew this woman is now 25, and she just continues to get better (which is amazing). Dondria sang with the @630 Band, and she made sure to put her own spin on it. She is currently putting the finishing touches on her sophmore album, which she has said will be on a more mature level. She is 25, not 19 anymore, and she's ready to relay the messages in her songs that she has experienced since dropping her debut album, Dondria vs Phatfffat. Well one thing is for sure, Phatfffat is gone, welcome to the stage: DONDRIA!

BUY: Dondria-Dondria vs Phatfffat
Posted by Random Entertainment at 7:50 PM