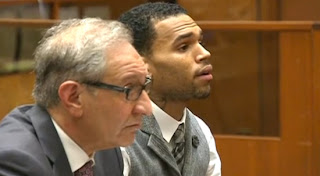 Yesterday Chris Brown was due in court for his probation hearing (Rihanna assault case). The singer let it be known via twitter, that he just want to get these 5yrs over with (the amount of time he is on probation) by tweeting:

Well, the hearing went well, but not so well. Chris tested positive for marijuana, and the judge basically let him off with a warning...THIS TIME. But hey with the way the media, & anti-breezy fans constantly berate him, I'm just happy it wasn't something more intense, ie..Crack/Coke..heck the pressure this 23yr. old is under is just crazy. I'm not giving him a pass, because if you want to reap good, then from your bad decisions you must know that the BAD IS COMING.

Nonetheless, Chris got some support from his #1 girl (uh friend..lol) Ms. Fenty herself, Rihanna. The pop start tweeted her support for ex (I'm not sure they are not already back together, but simply trying to ease us into it).

Which is the mild version of what she said first, but simply not @ Chris in the process

The Bajan beauty simply put, is no holds barred. Rihanna is not concerned with Chris's supposedly girlfriend Karrachue Tran, nor what the public think of her forgiveness of Chris, or the fact that she still considers him the love of her life. And nor should she. I have learned in cases such as these, as friends, family, fans, etc..it's only your job to advice (honestly when asked for it), and then pray...because when people are forced to be apart, it only drives them to become closer. The only thing I hope they understand at this point is simply this...they are no longer those same two people 3 1/2 years ago, they both have changed! And in order to have a good healthy relationship of any kind, they must see if they even like who each other has become and move on from there. They can't base a new relationship on the old one, because it will not work...actually the past is what will tear them apart. Yet to see Rihanna forgive Chris is probably the best gift she could have not only giving him, but herself. Now as for Karruche..um...well?


I for one am surely rooting for Chris to grow, mature, and excel at becoming a man who understands his position in life.
Posted by Random Entertainment at 10:45 AM