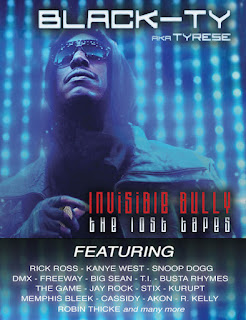 Tyrese alter ego, Black-Ty, shows up again, this time in the form of a mixtape called Invisible Bully (The Lost Tapes). The 53-track mixtape hightlights new tracks with the Game, Kanye West, Snoop Dogg, & more. It's definitely worth the download. Check out what Tyrese has to say below.

"Every Gift' taken for granted will become some form of a curse, I'm blessed w/ the Gift' of music in many forms.. Singing, rapping, writing and producing ... Life without music is like not breathing... 50 songs from the heart belong to you... Some old some new.. Love it, Feel it, Embrace it....

I jumped on the mic as a singer-turned.MC, caught a lot of heat and controversy for doing it and now all a sudden every singer has an alter ego and wanna rap.... And a lot of rappers are trying to sing... Classic Lol!!!! Music is music, there is no such thing as "STAY IN YOUR LANE..!!" WHEN YOU'RE A LANE CREATOR!!!

The release of this Invisible Bully Mixtape is bitter sweet cause the day I finalized it, we lose a music GIANT in Chris Lighty our big brother, friend and mentor who wanted nothing more than to share and help everyone... Let's all pray for his family and close friends... He was one of the first to believe in me as Tyrese & Black-Ty (http://t.co/bU39PFsv) R.I.H ... (Rest In Heaven) "


Posted by Random Entertainment at 9:34 AM