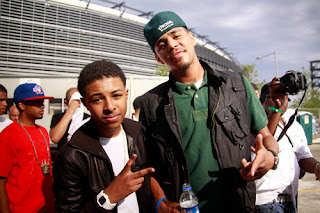 SMH...are these two going at it again? It seems that J.Cole made a reference to Diggy while performing in his hometown of N.C. by saying:


“The game need balance/woke up this morning to the rumors of ni**as wildin’/ Picture me hating on a young ni**a with talent/album flopped but it’s cool he caked up on his allowance.”


I really don't see how this "beef" benefits either of them. I say that because normally someone has something to gain from starting beef, but sorry I see no advantage being gained on either side here. The track is called Fall Down (J Cole Diss) featuring Victoria Monet, which is slated to be the first single from Diggy's upcoming mixtape: Out Of This World..so check it out.