Thank You! Thank You! Snoop Dogg aka Snoop Lion & Jermaine Dupri took time to give words of wisdom to Bow Wow. The premise of what they explained to him is, stay in your lane! Don't walk away from something you built! Your foundation that was laid by you! As JD said, "that's money left on the table." For everyone that take the time out to read my blog, the #1 thing I am always saying about an artist is, know your lane...and ride it to the end. When people truly blow up, it's like they abandon their foundation, the God-given lane that was created just for them! The thing that they invented..the thing that God gave them to make them unique in the game, and to be noticed! I have talked about it with Ciara, Monica (although now Mo definitely is back on track with a #1 album, and top 10 records to prove that running the lane that God gave you, is definitely worth it, Bow Wow.

The Scream Tour is now and forever will be known as the tour that Bow Wow built. Although he is older, there is absolutely no need for him to abandon it, but do just what his mentors told him...bring on new acts, and headline it. Can you imagine Bow Wow & Chris Brown announcing that they are going to rock the SCREAM TOUR?!! LAWD lil girls everywhere would be buying tickets...lol. Bow Wow & Michael Mauldin (JD's father) will have to work together again..but I believe that can happen. 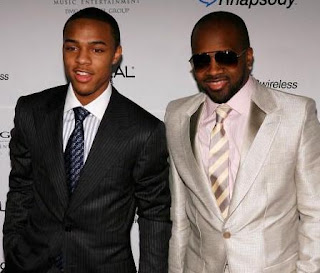 Also We all know that Bow definitely have acting skills, he even stated that he wanted to be the next Will Smith. Well Shad Moss, there is no time like the present...and yes I cried, during that same scene in Roll Bounce...lol.

Check out the conversation right here...Jermaine Dupri is on the phone.

Posted by Random Entertainment at 12:47 PM