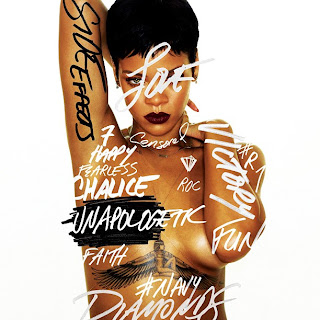 With so much going on in her life in the past few weeks, Rihanna decided to give her fans a treat: She previewed her album artwork for her 7th studio album. The first single, Diamonds was ushered in on the first day with being #1 in 13 different countries on Itunes, followed by becoming #1 on Billboards R/B & Hip Hop chart. She also asked the "Navi"(her loyal fan base) to find the album title within the "AllBlackEverything" on the cover, which revealed the title of the album to be: SideEffects. But in my opinion I love UnApologetic better. Afterwards though she tweeted that she will be making an announcement for the official album title. Check out the artwork...Rihanna better work!!!

Update: She let it be known that Unapologetic is the official name of the album and is dropping on 11/19. Now tell me that title doesn't encompass all of who and what RiRi is?

You gotta love Ri! Haters keep talking, while she keep stalking the charts. I swear the more people hate on her she gains another million followers on twitter...lol. Not too mention she leads the nominations for the American Music Awards, along with Nicki Minaj.

Posted by Random Entertainment at 10:46 AM