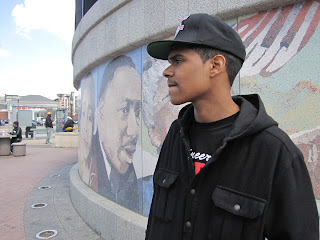 So let me introduce you guys to my new artist of the week: T.R.E.


On August 26, 1992 T.R.E. was born in the Northside of Richmond, VA. He grew up in a small home full of love. Since he was a small child you could see something special in him. From his father he gained an interest in music and at the age of 7 T.R.E. noticed he had a way with words. He noticed that his words would rhyme so he began to write more and more. Not long after, T.R.E. started to perform in local talent shows and freestyle battling in his middle school’s bathroom. From stage to school, T.R.E. was spitting 16’s. T.R.E. had a deal with Warner Brothers Records in 2006, but left to finish high school and further perfect his craft. Being raised around the streets showed him a lot and made him realize he was truly blessed. T.R.E. got to experience things that many teens his age would not have. From those experiences, T.R.E. knew that God had a special plan for him to be a blessing to others. By taking personal Real Life situations and putting them into songs. T.R.E. is apart of the Top Hat Digital Production #THDP family, w/ CEO Tremainge Givens, and CO Raushaad Harvey...as they are gearing up to hit the world this Spring/Summer with T.R.E. art/music!

Also check out his brand new video for his joint: Who Am I.