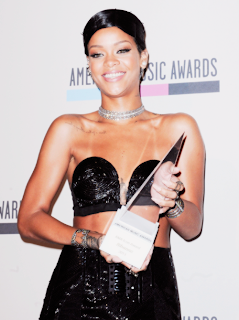 Last night, ABC aired the 2013 American Music Awards, and this would be the first year that the highly acclaimed awards show would decide to give out an  Icon Award, and their nominee of choice: Robyn Rihanna Fenty.

Since the day it was announced that the 25yr. old Icon would get the award, chatter started amongst fans of whether or not she deserved the award. Well she is the Voice of the Generation, and she has lived up to all the hype..dropping 7 albums in 7 years (this will be the first year the singer will not drop an album in November), and garnering endorsement after endorsement, from Mac Cosmetics to partnering with River Island for her own line, to having a reality show on Bravo (Styled to Rock), not to mention the record breaking world tour she just finished up..I could go on..no I really could there is so much more. But the Barbadian singer from the left side of an island will have to absorb all that has come to her in this season. Check out the touching speech her mom gave presenting the award to her...and Rihanna kept her gangsta by not crying lol.


Sidenote: 1. Rihanna literally rocked a doobie wrap on the live show...and killed it. I mean bobby pins (diamond studded of course but bobby pins no less) in place...I mean Lady Gaga arrived on a "human" horse, but by the time the show started no one was talking about that anymore, from the moment Rihanna was seen on camera excepting her first award of the night: Female Rnb/Soul album...the chatter went to her hair..smh..this girl could have come out with literal rollers in her hair with a onesie on and killed it. 2. I really wish that Chris was there, it's like it was the only thing missing. You just wish they would have made it for this moment. But she had her entire family with her..but yea Chrianna!


Posted by Random Entertainment at 6:26 PM