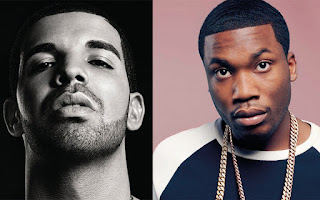 Well twitter got very interesting yesterday. Especially once Nicki Minaj started going in on the VMA's as to why she only had two nominations this year, and alluding to the fact that "race" may have played a part in it. Which led to Taylor Swift responding (which had me cracking up for the simple fact that Taylor was throwing major shade). But the twitter explosion of the night came from Nicki's now better(not so much in my opinion) half: Meek Mill going in on Drake. Basically saying the rapper didn't write his own rhymes. Now it's no secret that this blogger is not the biggest Drake fan, but this sounded a little far fetched. That was until Meek mentioned a man by the name of Quentin Miller. FunkMaster Flex did some digging and came up with the "10 Bandz" reference track, that was allegedly sent to him from someone in the OVO camp.


Posted by Random Entertainment at 10:22 PM