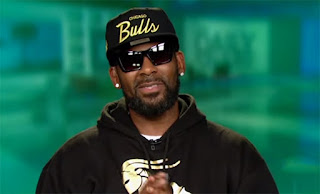 R. Kelly's set to release his new album Buffett on September 25th, and today, we get to hear the first single. Much less bedroom-centric than most of his material, the lead single "Backyard Party" was made to soundtrack the exact sort of get together referenced in its title.
Acting as a family friendly respite from his last album, 2013's Black Panties, as well as all of the allegations that still haven't been resolved, "Backyard Party" has Kellz literally telling us all of the things he likes to do during BBQs. That sounds mundane, but the song's actually pretty fun.
[via 2DopeBoyz]

Posted by Random Entertainment at 10:35 PM