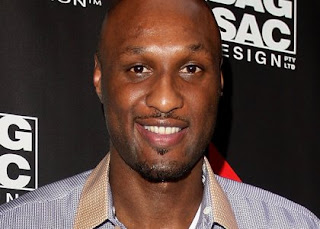 Let me just start by saying, I'm really praying for Lamar Odom. The things that this man has endured, it's amazing he is even alive right now. We all know of the tragedies that have struck Lamar's life, from losing his mother, grandmother, an infant child, to being driven by a car service who accidently struck someone and killed them, while he was on the way to the funeral of a family member. That coupled with the infamous Lakers trade that "almost happened" that would have sent him to the New Orleans (then Hornets) for Chris Paul. And this was right after a championship year, and when we seen Lamar have one of the best seasons of his 12yr career where he was named the NBA's 6th man of the year. So much has happened. He seemed to had the woman of his dreams but with all the aforementioned that happened, he seemed to spiral downward into a place where it was no one but God that could bring him out. This led to his inevitable divorce to Khloe, and Lamar trying to find his way back into the NBA. But after being cut by the NY Knicks last season, not sure if that will happen.

Now he finds himself in the headlines again, this time with TMZ running a story saying he "Ambushed Khloe" while she was headed to the gym...and LAMAR HAS HAD ENOUGH. Listen to him tell the TMZ reporter how he feels about the way he believes they have assassinated his character.


Lamar seems so upset because Khloe hasn't spoke up at least to say he wasn't stalking her or ambushed her. Then says if it happens again he airing everything out.


It just breaks my heart man.
Posted by Random Entertainment at 10:00 PM