Now, Adele is sharing a peep-hole into her soul. In an open letter via Twitter, the British singer opened about 25’s origins and the message she hopes to share with the rest of the world. In the letter, she explains that unlike her previous project, which was a break-up album, 25 is a “make-up record.” “I’m making up with myself. Making up for lost time. Making up for everything I ever did and never did,” she wrote.

The singer also detailed the impact the album’s age has had in her own life. She labels becoming 25 as a “turning point,” explaining that it was like “teetering on the edge of being an old adolescent and a fully fledged adult.”

As a whole the poetic open letter takes fans on a timeline of Adele’s coming-of-age story. In its conclusion, the singer addresses her absence in a simple sentence. “And I’m sorry it took so long, but you know, life happened.”-Vibe.com 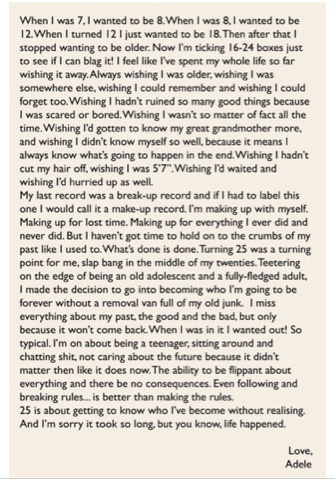 Posted by Random Entertainment at 4:51 AM