Lamar Odom has been through it all seems like, even to the brink of death, only to be given a new lease on life. The former NBA All-Star and 2x's champion, has now completed a rehab program that has him seeing life in a different light. He recently sat down and did an in-depth interview surrounding drug abuse, and what he has learned that has given him a new perspective on life. 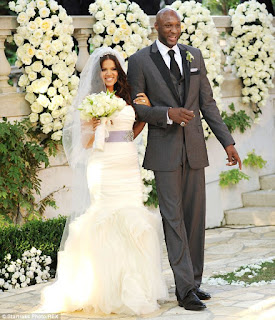 He let us know that he grew spiritually as well. One of the things he looking forward to was that he want's his wife back. I remember just following Lamar's story throughout his nba career (moreso when he became a Laker) and all the tragedy he endured. He lost his mom, grandmother, and his son..not to mention being in a car, where his driver had an accident that killed a young kid. With death seemingly all around him, he battled through it, and married Khloe, took less money to resign with the Lakers (because he called them family and wanted to be a Laker for the rest of his career). But things didn't quite work out that way. To me this latest downfall began the moment he was told that he had been traded to New Orleans. Lamar as I said before saw the Lakers as his "family" and he had shown his loyalty by signing back with the organization, but at this moment he felt betrayed. Even though the trade didn't go through, he decided to let his ego (hurt feelings) to rule over him, and he demanded they trade him anyway, and off to Dallas he went. We all know that (by his TV show and media coverage) he did not do well in Dallas, even though he was coming off a 6th man of the year, championship season. He left Dallas wearing his Lakers championship t shirt. After that rumors of his marriage going downhill. Regardless of what anyone says about the Kardashians as a whole, Khloe more than proved her love for her husband. And when he almost killed himself from an overdose at a brothel no less, SHE WAS RIGHT THERE FOR HIM. And we can all attest money was not her objective because she has plenty of her own. Unfortunately, they still got a divorce and now here we are.

I just pray that Khloe has one more try in her. I mean Lamar will be able to show her one way or the other if he is truly committed to his recovery. She has been in several different relationships herself since this all began, but IN MY OPINION, they are all seat fillers. Khloe never even hesitated in stating her love for Lamar, and I believe it's still there. Only God knows if her heart has truly remained for him. Forgiveness will definitely be what has to lead the way here.

Posted by Random Entertainment at 7:29 PM